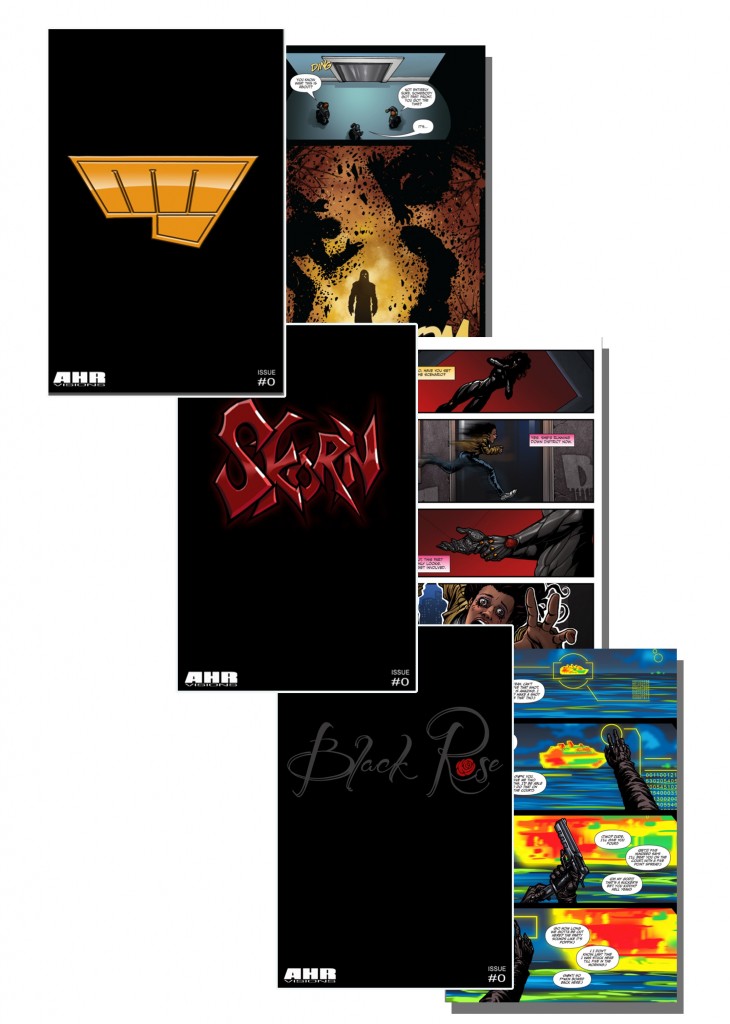 The Eight, Skorn & The Black Rose by Abdul H. Rashid / AHR Visions, L.L.C. are just a few of the offerings from this visual media company. Below are my thoughts on their preview issues.
——————-
Securing The World From The Ever-Present Threat of Evil Supernatural & Other-worldly forces…a race of Immortals fight non-stop to sustain balance. Amongst them..an Elite unit exists! The Eight!
The Eight #0 – The Last Transmission Of David Essex begins in a very cinematic way with a flashback served as a pre-recorded digital feed. Something or someone has attacked a space base and nothing can seem to stop it! The Eight #0 is a good appetizer for what seems to be a grand scale event. I liked the flashback premise and eagerly wanted to know more. With only 7 pages of actual story, I am expecting more backstory and reveals of who The Eight are. There is a full page promo attached showing 8 males, but I will have to wait and see if these are the heroes. Now I will say, if those are the heroes, seeing 8 males and not one female, throws me a bit, but redemption comes in the next review below……
——————-
Dedicated to a Self-Imposed Mission to Protect those who cannot protect themselves, Angelica Salazar vows to show the criminal blight that a fury is upon it!
Skorn #0 – Curtain Rises opens with a silhouette of a woman getting dressed in a hero outfit and ends with a dynamic pose of the street vigilante. The narrative’s premise is one where the heroine is being setup but to what end and what reason, is not revealed..yet. Speaking of reveal in Skorn #0, Abdul has a pinup of Issue #1 with another full view of the heroine, Skorn and she looks SICK!! I can’t wait to see how she develops.
——————-
Solomon Moor. Billionaire. Philanthropist. Businessman. Crime-Lord? Under the guise of a mysterious underworld figure, both feared and respected by the criminal society, Moor works to tear down the vile structure from the inside out. But, he walks the fine line between hero and villain.
The Black Rose #0 – Party Break opens with the high-tech survelliance of a criminal by Solomon. Issue #0 is very short without much detail but the next issue will hopefully delve into who Solomon Moor is and how he came to be a crime lord.
The AHR Visions’ comic book previews look very promising. The art work and colors look good, compliments of Abdul H. Rashid and Alexander Cutri!  Support Indie Creators and Their Projects!