by Zacharia Ali - Posted 12 months ago 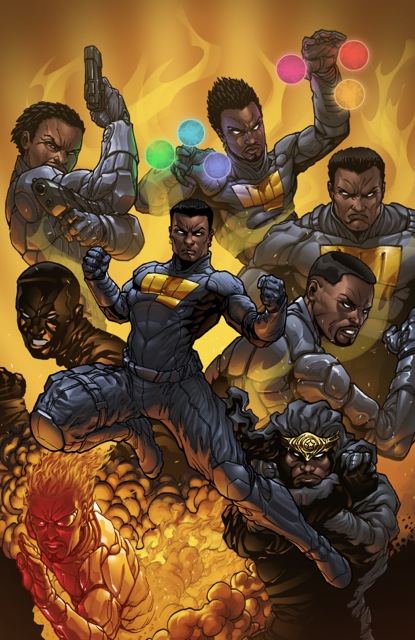 The Eight tells the story of a group of super powered Immortals who are tasked with protecting the world. Descendants of angels called Teachers who came to Earth during “The Fall”, these individuals were created with the goal of keeping Earth safe from various dangers, chief among them being evil Immortals called the Forever.
In the first issue we find that other groups of the heroic Immortals across the world are being destroyed by a mysterious powerhouse.  The North American based, The Eight, are now being made aware of the threat.
Abdul H. Rashid has crafted a story that that has the chance to grow into something grandiose, and you can definitely see that in this introductory issue. From the powerhouse first page, full panel shot of one our protagonists being on the receiving end of a super powered “Deebo/ Friday” esque punch, you can sort of feel the potential epicness that’s about to be laid out.
Another good example of this includes the backstory told of how the Immortals were created. I really enjoyed the character designs of the Angels, in all their golden splendor. The colors, and costume design for these characters in particular works well, making them appear really different than your standard depiction of the heavenly creatures.
Rahid’s pencils and inks are a plus on the issue, and Alexander Cutri’s colors work well in tandem with Rashid’s work.
Be prepared: there’s a lot of exposition here. The story is doing its best to get you caught up in the backstory for what’s playing out in present day. This works really well when the focus is on the Teachers meeting humanity for the first time. I think the conversation between Set and Ra during this flashback, as they trade philosophical differences on what the correct path for humanity should be, could’ve been culled down just a little. The conversation is well crafted in terms of art and writing, but clocking in at 11 pages kind of slows down the flow of a comic which started at such a rapid fire rate.
Also, as a fan of the first full page splash, I found myself wanting at least one additional scene of action, maybe even set back sometime in the past with the introduction of the Immortals. Rashid did a helluva job with the action within the first scene of the book, and outside of three smaller panels showing various scenes of battle in the past, there’s nothing that matches that huge action scene at the beginning of the title.
Lastly (not really a criticism, more of a fan dude request) I’d really like to see some super powered female characters, both good and bad, brought to life in future issues. Rashid’s art, and pacing for action could really kick butt with creating a female Immortal who can stand toe to toe with a host of insurmountable circumstances.
But overall, I think that Rashid and company have laid the foundation for what appears to be an action packed tale of gods and the monsters they fight.
Definitely give the first issue a shot, and stick around for the ride.
http://www.ahrvisions.com/ahrvisioins.com/Home.html