Abdul Rashid Talks ‘Black Rose’ And What To Expect From AHR Visions At NYCC!

Last year we were honored to speak with Abdul H. Rashid about AHR Visions and some of his upcoming projects. Since then he’s released several zero issues as he prepares to launch his creations onto the comic fans who are demanding something new and exciting from the industry. We actually caught up with him at this year’s NYCC and were able to go a little deeper regarding several of his upcoming titles, representation, and what you can expect from AHR Visions!
Comic Attack: What can you tell us about Black Rose, why he’s so important, and the concept behind your title character? 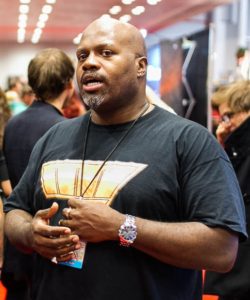 Abdul Rashid: Well, I think every studio needs a “Batman” so to speak. Black Rose is this studio’s “Batman” and he was created by Zacharia Ali who is one Abdul Interview-6of our business partners as well. Black Rose is kind of a merger of the two genres of gangster movies and superheroes. I’ve loved the gangster movies like Scarface, Goodfellas, and so on, but the problem is you’re kind of applauding for the bad guy when it’s all said and done. I know in the Hip-Hop culture we love the image behind these films where you’re coming from nothing to something but the problem is they’re STILL the bad guy! Ultimately they’re going to get their comeuppance. I wanted to really emphasize and personify a character that presented African Americans in a more positive light and to verge away from stereotypes that are saturating all platforms of media. And to give a nice presentation of how these characters can represent empowering figures. Black Rose is a merger of Batman, James Bond, Michael Corleone, and so on. When you create a character that puts all these elements together then I don’t care what color you are, everyone loves Batman, James Bond, and a good gangster movie. So merge all of these dynamics and you’ll have an amazing character to give to people.
The protagonist here in Black Rose is Solomon Moore and I thought also with him being a Muslim character we would kind of pull away from all of the negative stigmas and stereotypes that are blanketing Muslims overall. I’m Muslim and it’s very important we show characters such as Black Rose, such as The Eight in positive lights and give our children the opportunity to see characters that they can say “I want to be like them”. And just present characters in general that just personify the dynamics of diversity in our society today.
He’s also going to be that hardcore character and people will want to be him and see what he’s like. But he does have his own issues and inner conflicts goin’ on. I’ve written and drawn a solid story that’s very action oriented and full of realistic character conflicts to go along with the costumes and his (Solomon’s) other persona.  Being that he’s in this underworld society and law enforcement is thinking he’s a full fledged criminal.
CA: So, he’s actually playing both sides of the law in this story?
AR: Yes! Solomon is the philanthropist but “Black Rose” is the hero but is known to the underworld as a peer. He’s attempting to dismantle the underworld from the inside out so law enforcement sees him as just a criminal.
CA: Playing that dual role seems like it would weigh heavy on any character. Do you plan on exploring that further or at least giving him some type of support team to help out? 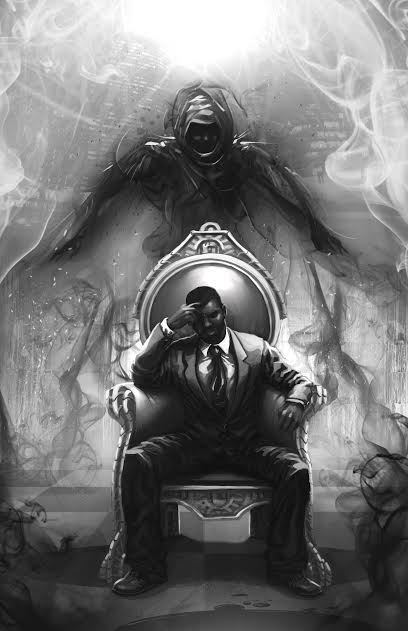 AR: This underworld element is something he’s been around since he was a child and as he’s getting older and growing up he’s looking at this like “this isn’t right” but there’s some good dynamics to his tutelage as well that he’s been exposed to. But in those bad elements he realizes is undermining society and catering to that. There’s a bigger picture once he really he really gets into it he’s going to come to realize it’s not just this level of this underworld organization. He’s going to find out the organized crime is a component to the REAL cabal behind it and feeds into this whole “Illuminati”  type group. They want to take him out and when you have the world coming at you, you have to have big network. Fortunately he has that big network. It plays on that conflict because some of these people are going to be individuals that he’s grown up with and known as Soloman Moore. One of those is Killer Jack and we’ll see him in the second issue. He comes in like a tank!
CA: You’ve already introduced several other characters in your line up. Now, is this a shared universe where some of them might meet at some point?
AR: I think you’d want to have big events or big situations where you have a crossover but when we do the big reveal in terms of where this opens up next THEN we’ll open up the crossover. So characters like Skorn and Black Rose will interact with each other. She’s the all out vigilante type who comes across someone who she thinks is a villain. It’s not gonna be pretty when they meet up!
CA: Skorn herself is a visually striking character that doesn’t fit the usual designs of females in comics. What was the thought process going into her development and design?
AR: Skorn is a Latina character and I felt that she would carry that strong female embodiment that’s needed and help pull away from that comic female translation where they’re basically in swimsuits to fight. The thing is, if you’re in a fight situation and all you have is a cat suit you’re going to have scars. I don’t care how good you are, when you go up against someone who knows what they’re doing (laughs)! So I wanted someone who was not only sexy but very strong and imposing. When she makes an entrance it shouldn’t be “Oh I want to get with her!” but more like “Holy crap! I’m in trouble!” If you see her you gotta be thinking that your day just went from bad to horrible real quick!
I really just wanted all of our characters to get away from the large negative perception in comics especially people of color when it comes to her overall design. But I’m a kid of the late 80s early 90s where there was that conscious thought and I felt that it needed to be reinjected into our media and popular culture.
CA: With many of your titles already previewed in zero issues which one can we expect to see first when you launch?
AR: Black Rose, The Eight, and Skorn will be launching relatively around the same time but Black Rose will be THE premiere title.
CA: What is it about Black Rose that made you want to put that one out as the flagship title?
AR: The Batman element (laughs)! I think people will just like how the character comes off. I wanted him to be cool and deboinaire but also be menacing. The Eight is very solid and I think people love a good superhero title! I just think people are going to love all our characters!
CA: Aside from one of the titles, you’re actually writing and drawing most of these. Does this make the storytelling easier for you to keep everything on track or will there be a time you take a step back from one or the other and let someone else run with the stories?
AR: Yes, except for Rebirth, that’s exactly what I’m doing with The Eight, Skorn, and Black Rose right now. It makes it easy because I have five story arcs already planned for each individual title and I see them clearly. It’s just something I’ve always been able to do. I just do it. For me with my art, I’ve been fortunate enough to evolve and get better as I go on with the illustrations and I’ve been happy with that direction. I am going to have a talent search for those looking to do something brand new. We’re going to really promote and put these characters in the faces of everybody very soon. 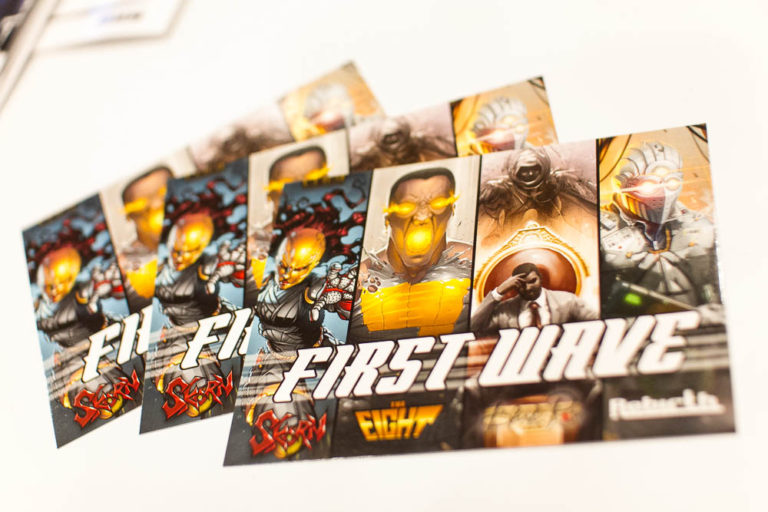 CA: Lately there’s been a huge outcry for better representation in comics behind the scenes and in the pages of the books. What do you say to the fans that have been stating that there is no representation and aren’t satisfied with the replacing of a white character with one of colour?
AR: The problem is the current platform. I love Marvel and I love DC but with the Big 2 I fell there’s a comfortability sometimes and you want to stick with what you know. But once you stick with what you know you’re not taking the time to really put a diverse, fresh, original take on characters. Here’s my thing, don’t “blackface” Spider-Man and don’t take a character that’s established like Falcon and make him Captain America. To a degree it’s a little disingenuous, now this is just MY opinion, because they’re still the same character. Sure you want to parlay and ride that established force to success, that’s great but really just sell a strong character. If Iron Man went from a B list to an A list character then do that with Falcon or Black Panther.
Now, for the audience that’s looking for representation behind the scenes and in front then come to us. That’s why we’re doing this because we want to show you there’s strong representation here and we need your support to help push this to the forefront. As we go into the storylines we’re going to show you the rich fabric and texture these characters will be projecting. It’s not just for one demographic but it’s for everyone. That’s one reason I love the arts because it should go off your credits and merit and not by the colour of your skin.
There you have it folks! More new titles will be coming real soon for those of you looking to try out something new and different from what you might already be reading .