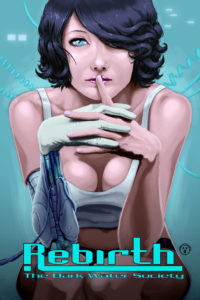 Rebirth #0
Writer: Alexander Cutri
Artist: Alexander Cutri
The world of Rebirth is one where the people are literally connected to their wireless environment, which allows for accessing all the information you want all the time, and being open to everyone at the same time. We soon meet Bishop who doesn’t see this technology as the best thing, unlike his friend Niko, who seems to have gone a bit overboard in his enjoyment of the tech.
In a pretty short preview issue, Cutri quickly gets your attention with the premise and the visuals. Strong artwork shows off the detail of the tech heavy society and the hint of a pretty intense action scene. We also get to see a bit of the personal information about others that is readily available for those who are logged into the system. Just this small look is a bit scary if it’s any indication as to where our own society is headed.
This issue does what it’s supposed to, and that’s reel you in for the entire experience we’ll be getting later this year. So when Rebirth hits shelves it will be nice to see where Cutri is going with this story and the characters involved. 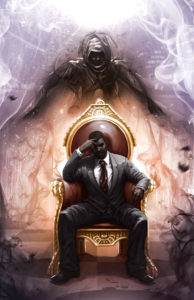 BlackRoseBlack Rose #0
Writer: Abdul H. Rashid
Artist: Abdul H. Rashid & Alexander Cutri
There are some bad men on a yacht enjoying themselves and quite ignorant to the fact that there is an even badder man about to end their evening. When the primary target gets a glimpse at the assassin’s calling card, the look on his face tells us all we need to know.
Much like the previous zero issues from AHR Visions, this is a very brief look at what we can expect. However, it’s filled with Rashid’s great looking visuals which have only improved since first seeing his work in the New-Gen series years ago. As far as the dialogue goes, there’s not much, but it is entertaining and serves the purpose of moving the story along pretty quickly.
Now, even for a zero issue I do wish things could have gone on just a bit longer. Only because there’s a bit more information about the main character in the press release that I was hoping would play out here. But I guess that’s the purpose, right? To get you excited enough to want to come back for more. So that’s what I’ll be doing when this series debuts the full first issue, and hopefully the momentum will continue!